In most places in Southeast Asia, it is standard practice to dive under the guidance of a divemaster. This is usually a nice addition to the dive (we try!) : as professionals that have dived the site many times before, we know better than anyone else where to look for the cool stuff, where the prettiest part of the reef is, or we can guide you straight to the points of interest on a wreckdive.

However, maybe because doing guided dives is so common, many divers have come to rely completely on their divemaster – novices and experienced divers alike. They have no clue where they are at any time during the dive (a problem if you get somehow separated from the group and have to find your way back to the entry point) and rely on the “how much air do you have?” question from their guides to check their airsupply.

If you’re asking yourself if you might be one of those divers that rely too much on their divemaster (or guide), have a look at this list and at your own dive behaviour. If you’ve ever used, or relied on, your divemaster for the following, perhaps it is time to improve your skills – for your own safety. 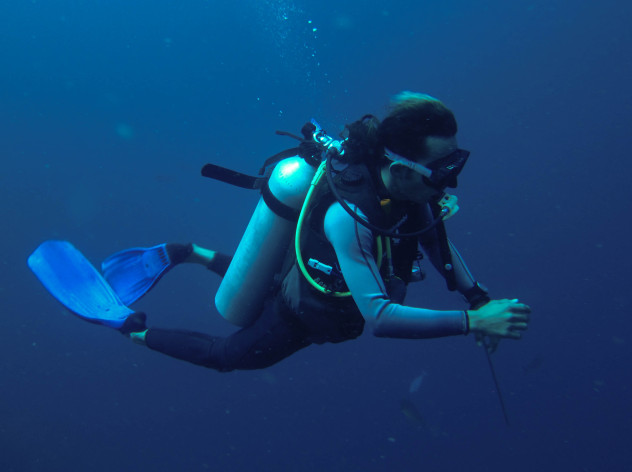 We are not your backup air supply

Fortunately, this one is not too common, but it still happens more often than you’d think: divers that signal that they’re low on air (thanks for letting us know though – we do appreciate that!), swim towards you, and indicate that they would like to use your alternate air source so they can continue the dive and get a bit more bottom time.

I shouldn’t have to explain to you why this is a bad idea, but I’m going to do so anyway, in case you’re one of the people that do this.

First of all, it is not safe. I’m personally not a fan to continue diving while one of a buddyteam is low on air (but if you and your buddy have both agreed to do this beforehand and have practiced it, you do you), but to use your DM’s airsupply while you’re NOT buddied up with said DM is ridiculous. I really don’t know how to phrase this in a nicer way. What if the DM has to handle another emergency situation? You’ll probably have enough air to switch back to your own regulator for at least a little while, but the time it takes to communicate and do this will impact the time the DM has to respond to other divers’ needs. Second, having another diver constantly swimming right next to you also limits your ability to move around, communicate with the other divers, and look for cool stuff. It is also just really annoying. And while most DM’s are pretty ‘good on air’ (as in: they probably use less than most of the divers they’re guiding), we like to keep some on hand for real emergencies. To be clear: being low on air is not an emergency, but it is time to end the dive.

We’re also not your personal navigation device. Still, you should follow us.

I get it, I really do. Early in my dive career, I sucked at underwater navigation and it took me an embarassingly long time to figure out a compass. And sure, one of the great points of diving with a guide is that you don’t have to worry about counting kickcycles or setting your compass and other things like that. Heck, you don’t even need to have a compass (although it wouldn’t hurt to have one). You can just follow a guide and look at things. Still, I recommend you to at least kind of pay attention to your surroundings so you have a vague idea of where you are. I’m setting the bar really low here: I’m talking about having an idea about the general direction you’re swimming in (are you following the edge of a reef? Is it on your left or right shoulder? Did you turn?).

Let’s say you’re the exception that has a sense of direction, or the rare unicorn that dives with a compass on a guided dive. Let’s say you know the particular dive site, and really want to check out the other side. Do not swim off from the group (with or definitely not without your buddy!), without discussing with your divemaster first. This discussion should happen before the dive, when you’re out of the water. Us yelling at you on the boat because we thought you got lost is not an appropriate way of planning the dive.

We are not your instabuddy (unless specifically agreed upon)

If you travel without a divebuddy, it will happen that you get buddied up with another random diver on the boat. We really try to do our best to match skill level, dive objectives, air consumption and such but sometimes the chemistry between divers is, well….lacking. If that’s the case, we’re really sorry. Please address this and we’ll try to buddy you up with someone else. That being said, it is not cool to ditch your buddy halfway through the dive and decide to dive with us, instead.

Also, and this one is really common, the fact that you dive with a (small) group guided by a divemaster, doesn’t mean buddyteams don’t matter! They still do! Even if your buddy is someone you don’t know. You should get to know each other before a dive anyway, and plan the dive together. If your plan is to simply “follow the divemaster” it’s still a good idea to share some thoughts about how you’re going to look out for each other, any special interests you have, and what you will do if you get seperated. This should be included in the group briefing too. If it isn’t, ask. A divemaster cannot be the preferred divebudy of everyone in the group, not even when everyone is a n00b. Step one to get out of n00b level is starting to take responsibility for your own safety and your own buddypair.

These three things that divemasters do all the time, but divers should really do themselves, are pretty serious. They mostly come down to divers not taking responsibility for their own and their buddy’s safety, just because there’s a divemaster around to babysit them. Don’t be that diver. If you have to, ask your DM how not to be that diver. They won’t bite your head off and will love you for your self awareness. Instant diver karmapoints!

For other, smaller, things that divemasters do all the time (but don’t have to) I could go on another 1000 word rant, but I’ll leave that for another time.

Fellow divemasters, do you recognize this behaviour? Are DMs responsible for nurturing this behaviour? How do you deal with it? To divers, done this? Are you doing this?

Rosien has been working as a PADI instructor since 2012 in Malaysia and Indonesia, among other places. She started diving on the Perhentian Islands and they will hold a special place in her heart forever.  If she’s not diving, she’s writing and editing the articles for this website or possibly wasting time on twitter.

3 comments on “Three Things Your Divemaster Shouldn’t Have To Do, But Does All The Time” Add yours →